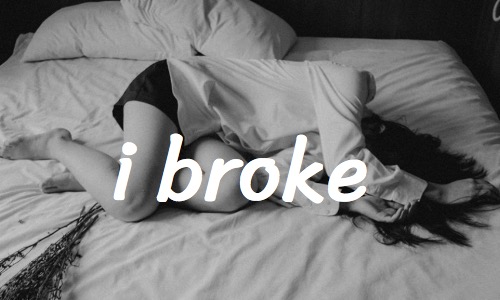 I broke.
Plain and simple – i broke…
This past fortnight – my mind just couldn’t keep itself together anymore, and i broke…

I went to the Doctor back before we went to New Zealand, just for a general annual checkup; and when we were finishing up, I told him that there was something that I had forgotten, but I didn’t know what it was – so as I was paying my bill and leaving, I made another appointment (cos this guy is super hard to get into!) and that appointment date finally rolled around, and was yesterday.

It would have been great if it was a week or two earlier – but I’m sure glad I made it – even if I’ve had to wait almost 2 months to attend it.

The thing that I had forgotten at the first appointment, was the worsening connective tissue pain that I have been experiencing for about a year.
I am now at the point where raising my left arm above level, causes a huge amount of pain, and a range of other areas (elbow, wrists, back, hips) are all suffering various degrees of the same issue.

However, in the last few weeks, ‘Life’ has been getting on top of me more and more, and as mentioned in another post I wrote about “the blur” – where I explained that I could feel myself slowly spiralling into panic – last week that panic hit full-blast – and I ended up not being able to even manage to go to work last Thursday, and I spent a big part of the day alternately sobbing my heart out; and wading around the Farm feeling thoroughly hopeless and helpless with no idea what to do…

There have been a couple of red-flag moments in the last couple of weeks, and whilst this last week has been a big improvement on the previous two, I know that I can’t work through this one on my own.

Its been a hard realization – and it was even harder to tell our Dr/friend – who is so used to me being buoyant and bolshy, that I was drowning.

I didn’t particularly want to – but as I sat there with him, working out what plan of action we were going to take next to investigate what was going on with my body – I knew that I needed to ask him for help with sorting out my mind too…

So here we are at the start of a new week – and today I’m not doing so flash.

It took me until about lunchtime to do the dishes – something that I usually do as soon as breakfast is done.

I can’t settle my thoughts onto anything, and I keep realising I’ve started doing 10 things and forgotten each of them part way through, and only noticed that I hadn’t finished them, when I found them not completed!
GAH!

I also have a raging headache – even though I’ve taken two lots of paracetamol.

Late tomorrow (Tuesday) I go back to see the doctor, as he wants to do some more anxiety/depression testing on me and check on the reults from the bloods I had drawn last week, before I go to see the psychologist on Wednesday morning – which it seems I was lucky to get into so quickly, after being told by the Dr it would probably take a couple of weeks…

I also have work tomorrow, Wednesday and Thursday – and right at this minute, I’m not sure how I’m going to manage with that – particularly as I am going to have to leave work to attend my psych appointment – and then (in theory) go back to work after it, as its a mid-morning appointment.

I’m also anxious about the trip away that I need to make at the end of this week.
I’ll be away for five days.

I need to go help my sister sort out and pack up the home that my mother and her husband lived in, until they went into the aged care home – and its something that I very much feel that I need to go help her do – and it will be great to see two of my brothers at the same time – but I’m not one of those people who enjoy being away from home, and don’t feel very competent at this solo-travel business – even though in my head I know that I’m perfectly capable of it, and did it very successfully loads of times, in my youth!!

Part of me feels like if I can make it through this week, I’ll make it through whatever is coming at me next – but all I can do for now, is to keep reminding myself to breathe, to concentrate on what I can do, and to let go of any expectation of what this week should ‘look like’.

Its an unknown, and I have to be ok with that, and try roll with it…