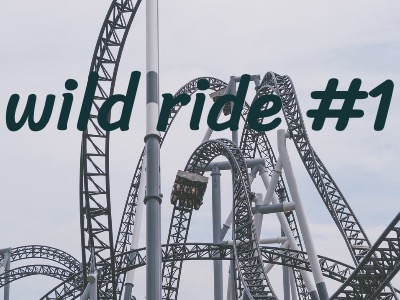 Its been a wild ride for the last few weeks, and a ride that I’m still in the midst of, and I’ve gotta say – that some of it I’m not lovin’ so much!!

I’d been starting to ‘spiral’ a bit after I last posted, but then a series of events happened that just swamped me totally, and I felt like that wild ride was taking me crashing back down through the floor…

Firstly, whilst I was seeing some small advances with our joint counselling sessions, I was feeling like the majority of any getting-ahead was happening mostly only in the sessions, and wasn’t transferring to our real-world everyday Life.
And I was feeling a bit ‘played’, by that.

Then, the State that we live in which has been suffering from the most gut-wrenching droughts, where stock had been routinely starving to death, and Farmers were walking away from their Lands in despair – was suddenly engulfed in never-before-seen ammounts of water from weeks of torrential rains, then the resulting total devastation of flash-flooding.

The majority of the stock that Farmers had been able to hand-feed and keep alive – were washed away and drowned, and the Farmers have been left with mass piles of stinking rotting carcasses to try and bury / dispose of.

Some of our family members were in the path of that flooding, with our eldest daughter having to evacuate and her home being inundated with mud and water over a metre deep – which destroyed almost all of their belongings, including precious photo albums.

And then a friends husband tragically died in a freak accident, leaving her and her two small children shell-shocked and (obviously!) devastated.

The crazy circumstance of his death, his young age, the ‘unfairness’ of it all, sent my already wobbly emotions right over the edge!

I knew it was time for a solo check-in with my counsellor, and she thankfully managed to fit me in on fairly short notice.

I think I spent most of that hour sobbing.

But there were a few things that floated to the surface for me, that I recognised were of importance to me and needed to be ‘dealt with’, in some way…

The first was about the old adage of the days being long, but Life being short – and this one hits me more and more in the face, as each day, week, month, year passes.

We have one short, important, glorious, fucked-up, amazing, beautiful Life, which is gone before you can barely blink – and in some cases, is over with before it’s even properly begun.
This also becomes even more obvious on a daily basis, when you have a life-limiting illness…

The second thing was – that I have the right to make certain (reasonable) demands of people and to have and impose boundaries around how I am treated, and that it’s ok to not put up with being treated in a way that I find less-than-acceptable or inappropriate.

That evening, My Love and I had a big talk.
Wellllll – in all honesty, I did the majority of the talking – in amongst a pile of sobbing, sniffling and tears!

I laid out how I was feeling, as best I could, and explained in brief what I felt I needed.

It was a conversation of plans and intentions – and I’ve heard it a number of times before, but I am willing once again to see if this time around the intention will ’stick’, or if it will just fade away as it has before…

At only about 10 days in, we had our next joint counselling session.

I was in the midsts of telling our counsellor a very broad overview of what had been going on, and was explaining that although we were only 10 days in from the conversation that had been initiated by My Love, that I was feeling hopeful, and more trusting and respectful toward My Love, when our counsellor asked if she could know what the conversation had actually been about.

My Love said “no – not at the moment”, and it felt (to me) like that was right about the moment that the session came to a stand-still.

Our counsellor – bless her heart – tried to move it along, but everything after that was just superficial chit-chat.

At the close of the session, she reminded us that we needed to revisit our conversations and to keep having them, even though it would be hard work and uncomfortable for us both.

That was just over 2 weeks ago.

I’ve sent My Love an email about our session – but I’ve had no response.

And there have been no further conversations…

One thought on “wild ride”