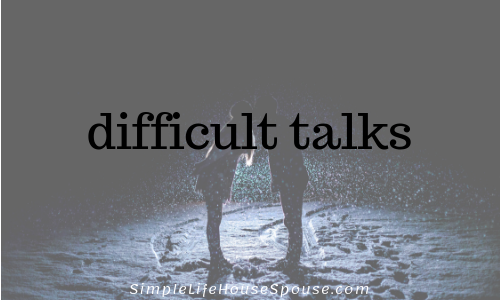 It’s been a while since my last post (about 6 weeks or so), and I apologize if you’ve missed me – although it is the season for most people of busy-ness and stress – so it’s probably the case that you haven’t even noticed I haven’t been around…! :))

In days blog, I’m going to talk about arguing, difficult talks, and communication in general…

In fact – the opposite can often be true, in partnerships where there isn’t ever any arguing!

And yes – I speak from experience!

My Love and I had very different upbringings, with different communication styles being learnt as a result, and this is particularly evident around how arguments were dealt with.

As the daughter of British parents, my Family-of-origin was a very mixed bag of styles.

My Mothers side of the Family were stiff-upper-lip folks, who would most certainly not argue (so “common”!) and a well-polished veneer of properness was always plainly visible.
I don’t recall ever hearing my Mother raise her voice at anyone, nor ever openly disagree with her husband on anything.

My Fathers side of the Family whilst never loud or aggressive and were happy to not agree with others, however even if there was vehement opposal to someones opinion – the arguing was always about the topic – and not about the person.
(ie: it wasn’t a personal attack)

I was taught that once you start attacking the person and not the topic (or the behaviour) then even if you’ve ‘won’ the argument – you lost the battle because you lowered yourself to attacking the actual person.

My Love – on the other hand – came from an early Family dynamic that had an abusive stepfather who wasn’t shy about getting physical to get his point across and was only too happy to verbally denigrate Family.

It taught my Love that if you dared to go against the grain and be even slightly disagreeable, you were in for (at best) derision and ridicule – and made to feel very much less-than.

As a result of our differing upbringings – there is an actual inability to have an argument, or to talk about the ‘difficult stuff’!

Whilst I would happily talk ad-nauseam about anything difficult just to get it out into the open, and hopefully find a solution that is workable for us both, my Love will avoid a deep-and-meaningful at any cost…

My Love and I are still attending fortnightly counseling sessions, which I’m really stoked about – but a part of me has also been a bit anxious about it too…

Each fortnight we are set some ‘homework’.
The first fortnight was a writing task.

My Love said the there had been a miscommunication, and that she’d thought that I was supposed to do the assigned task first – but that hadn’t been what we had discussed with our therapist.

It made a part of me really sad that My Love hadn’t made the ‘effort’ to engage – but then another part of me knows how incredibly difficult this is, for My Love to open up and be vulnerable – but then the sad part kicks back in, that she doesn’t ‘trust’ in us enough, to be that vulnerable person, without fear…

We had our next session, and as the writing task hadn’t ‘worked’, our therapist suggested that this fortnight we try a verbal homework task, of discussing a ‘difficult topic’.

We also discussed the fact that I only have two ‘difficult topics’ that I reallllly want to discuss – and My Love knows what they are – and pretty much wants to avoid them at almost any cost – so again we mutually decided that My Love would go first, and then when it was my turn, I would give the choice of two topics, and My Love could decide which one would be broached.

So, two days before our next appointment, I checked-in with My Love and asked if joint counselling was still something she wanted to do; and told her that I didn’t want her doing it just to ‘please me’ as I didn’t think that that was productive for either of us in the long-run, if she was only doing it to appease me…

It was a bit of difficult conversation, with some tears shed by us both, but My Love said that she felt like she was making headway, that she liked our therapist, and that she wanted to continue.

So off to our next session we went.

We all discussed that the homework hadn’t been completed, and we were told to keep trying again over the next fortnight.

Which is where we are now.

My Love did ask a difficult-for-her question earlier this week when she thought that something I had said was meant in a mean-spirited way, which was cleared up quite quickly – but that is just my perspective – and whilst I asked her later is she was ok and she said she was, its again hard to know if she was just saying she was, rather than being again seen to be vulnerable…

I guess the session next week will give more enlightenment to that.

I hope that that isn’t the only “difficult talk” we’ll have before our next appointment.

I know I’m probably being impatient, but I’m one of those people who just wants to rip-off-the-bandaid and deal with whatever gets revealed.
To me – its more agonizing to rip it inch by inch, creating pain with each small increment…