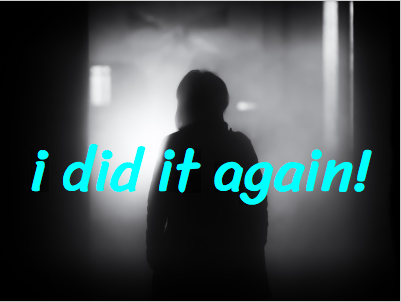 I somehow managed to put my back out again – whilst getting up from the toilet.
How does that even happen!?!?

I spent that day being pretty damn teary and miserable – I didn’t feel like I could go through another few months of being bed bound and rehabbing all over again – but then of course, if this isn’t just a short term flare-up, I don’t have any damn choice in the matter, other than to start back at square one!

Theres also the issue of finances…
My Love has just changed jobs, and needs to re-build her contacts, and get some Sales back under her belt so that the income is back to ‘incoming’, and of course the old employer hasn’t been at all forthcoming with information to her customers when they ring up to get a hold of her – which whilst i know is definitely well within their right, and is totally expected – but it still feels kinda shitty (& petty)…

At the same time – even though the income isn’t what it usually is – the out-goings remain as they were prior to the move, and my part of the income is definitely needed right now, just so that we can eat – so a period of enforced time away from my work and the associated pay-cheque – scares the living daylights outta me!!

Its now almost a month since that happened, and I have been back at physio, had a fortnight of half-days again, at work, and am slowly on the improve.

Its a mentally difficult thing having it in the back of your mind every.single.moment of every.single.day – that at any moment, I could be laid up indefinitely…!

I don’t want to live every aspect of my life being super-careful, but i also know I cant just jump right on in and do everything that i either want to do, or have always done.

Its all a matter of learning and respecting my own limitations.

Not an easy thing – and something I know i will slip up with from time to time – but I’m trying to be sensible!!
One day at a time…