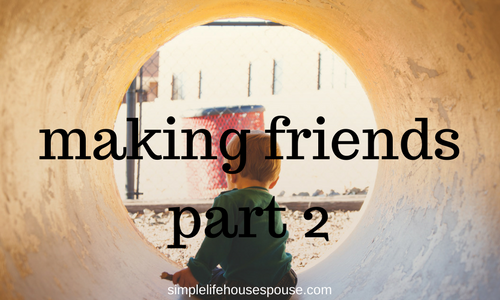 One Friday – one the following Monday.

The one on Friday was the second time I have had coffee with this person, who for the purpose of lessening confusion, we’ll call Person A.

At that stage, I was still in the “i don’t know if she’s my kinda people” stage of things, and whilst there was a lot about her that gelled with my ethos etc, I just wasn’t fully convinced that this was going to be a worthwhile investment for either her or me….

The following Mondays coffee date was someone I have known for quite a number of years. (yep, Person B)
We originally met at work, and these days we work pretty much parallel to one another.
She’s someone that I don’t spend any real social time with usually, but that I do trust to keep my confidences anyways…

Sooooo – I was talking with her about my recent ponderings on ‘friendships’ and how difficult I find them to navigate them, and she is very much in the same boat, as we are both hermits-by-choice outside of work.

I went on to tell her about the two coffee dates that I had had with Person A, and was giving her a run-down of what had transpired on each ‘date’, when I noticed her face was looking more and more incredulous.

And as I was talking, and actually listening to myself talk – I was putting these two seperate events with the same person, into one almost-combined story, and it gave me such an incredible dose of clarity that it actually had me quite gob-smacked for the rest of the day!!

You see, when events happen separately, we tend to tell people about them separately.
For example, each time I had had coffee with Person A, I had come home and told my Love all about it.
What we did, what was said, all the sort of waffley stuff you talk to your Spouse about…

But when I was talking to Person B about them, I was telling her about the two events all at once.

And boy oh boy – did that make things sound a whole lot different to my ears, to what I had previously thought I was thinking!!

It was an amazing epiphany – and I think there was even the whole ‘parting of the clouds with rays of sunshine shining through‘ to go with it!!!

Anyways – the upshot of it all is this:
I am going to be brave!

I’ve been out in the sunshine, digging up weeds from the garden-bed edges for the last two hours – and just thinking about “stuff”.

Lots of different stuff – but stuff none the less 🙂

Firstly – on how the ‘flying solo’ went.

The only things I didn’t do, that were on my list, was to have a bath and catalogue some books!
So I think I kept on track pretty darn well.

The ciggies have been out of my system for a week now – and there has only been about twice that I’ve realllly thought much about it.
One was on Saturday night when I was full of vodka, but that was to be expected, and the urge was really easy to get rid of – I went to bed – lol.

The other was my first day off after working, when I didn’t have a plan – as I usually do for days off – for what I was going to do that day; as I’d initially been going to go to work, and then didn’t.
Problem was solved by getting busy, pronto! 🙂

Although it isn’t a conscious thing, I’ve learnt that “wasting time” is a big impetus for me, with smoking.

I’m guessing it’s one of those ‘womanly’ things, whereby we feel guilty for doing nothing, so when we take a five minute break we get the guilts, even if we don’t actually realise it.

However, if you’re a smoker, you can ‘legitimately’ take that break, because you’re not doing nothing – your doing something, you’re smoking!!

Other people may have a whollllle different view of this – gawd only knows – but I’m pretty sure it’s true of me, and I’m also pretty sure that there are others who ‘use’ smoking for the very same reason – even if they have no earthly clue of it…. 😏 ….
(or don’t want to admit it!)

When I was out gardening, I was also thinking about what a difference a fortnight makes…

Two weeks ago, I was waaaay sicker than I am today.

I was having a lot of difficulty with normal everyday tasks, and I was wondering how much longer I could continue working nine hour days at my job – even though it is only a couple of days a week.

I was tossing around the idea of asking if I could do less hours, but more days – so that I was still doing the same number of hours per fortnight – or of giving away the job completely, and looking for something that was more suitable to my ‘abilities’.

Either way – I was scared of the unknown that lay around the corner, as far as my employment options went – and it was weighing on me very, very heavily.

But today, a fortnight later, I feel bright, alert, healthy, and able.
I feel like I can keep going in my job as it is now, and maybe even seriously consider doing some extra hours.

I don’t know how long these feelings will last – but I’m hoping it a good amount of time!
😊

One of the other drawbacks – for me – about work though, is that I’m a hermit by nature.
I like to be at home, I like doing housework, I like to work in the garden.
These things give me a far greater sense of purpose, and feelings of accomplishment, and happiness, than any job ever will.

If I didn’t feel ‘obligated‘, and it wasn’t a necessity to contribute to paying the bills, and buying the groceries; I would happily quit my job in a heartbeat…

Another of my trains of thought whilst out there digging, was about “lessons that are sent to teach us“.

I am an avid believer that we keep being sent ‘lessons’, to learn something from, and those lessons keep coming to us, until we work out what it is we are supposed to learn, and we take it on board…

Whether others believe that or not is irrelevant.
It’s a bit like god – the belief or nonbelief doesn’t make it any more or less real.
Each of our lessons is a personal thing – for us to learn & interpret for ourselves.
Others will have different lessons of their own, from the same events.
What I am meant to learn, will be different from what someone else is meant to learn.

I was reminded of this, earlier in the week.

An acquaintance – whom I don’t particularly like – had texted me, and asked me to meet up with them.
I tend to avoid this person as much as possible, so that I don’t have to interact with them, but it can be a little tricky sometimes, as we work at the same place.

I semi-agreed (against my better judgement), but didn’t settle on a day, time or place.
Over the next couple of days, I received a lot more texts, which I ‘obviously’ didn’t respond to in a timely enough manner, or with the correct wording sequences. [insert sarcasm]
As a result, the texts got to that point of ‘batshit crazy’, which is what initially warned me off said acquaintance.

The universe had kindly sent me a very timely reminder of just why I don’t interact with this person.
And it gave me a very much appreciated kick in the pants, at the very right moment.

I realise we are all a special kind of crazy, or some sort, to someone.
I know that I am most definitely someone else’s idea of a special sorta crazy, and I have no problem with that.

Lesson noted – I won’t be agreeing to a meeting. Thank you ☺

There was something else that I’d been thinking about out there in the sunshine – but I’ve waffled on for so long, I’ve forgotten what it was now!!
lol