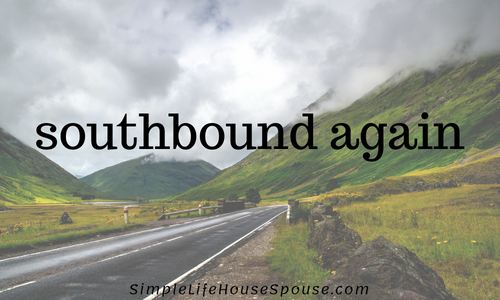 SO…here I am once again sitting at the airport, waiting to get on a flight and I’m southbound again to go and help with tidying up yet more affairs of my deceased Mumma and her very-much-alive Hubby (TnT) – who is now in Aged Care.

Its been a pretty stressful time for the last fortnight, with the house having gone on the market, selling really quite quickly, then T initially not wanting to sign the contract, but eventually signing it, and then after the house became unconditional, he refused to sign the Transfer of Title for the house to go to the new owners, stating that he no longer wanted to sell it and that he was going to move back in and have someone come live with and care for him.

This declaration had the possibility of being devastating on soooo many levels!

Firstly – T is having regular falls, in an Aged Care home, where there are actually people there, and available and helping him, 24/7 – so how he thinks he can possibly manage outside of a healthcare facility is waaaaay beyond my comprehension – but I also have to respect and understand that he is still grieving over the loss of my Mumma – its not yet even been three months since she passed – and that he is also not only in denial of his abilities (or lack there of) but is also angry at the world for making him feel so infirm and incapable.

He also has early signs of dementia, though the full effects of this are hard to determine due to the grief he is currently experiencing.

Secondly – if the Title isn’t signed, and the Sale can no longer go ahead – we have two options.

As EPOAs, we can register with the Titles office and go ahead and sign it on his behalf – which we would prefer not to do, as it just takes decisions out of his hands even more, and makes him feel even more incompetent – or we can let the Contract die, and be potentially sued for a shit-ton of money, which of course none of us actually has; by the people who were going to be the new owners.

Anyways…the Lawyer fronted up to T last week to get the Title signed, and sure enough – T refused!

We (both EPOAs) died a little inside that day – thinking about everything that was about to come crashing down around us – one way or another.
A phonecall to T to see what was going on, branded us all gold-diggers whom were out to rip every last cent off him etc etc – you get the idea…

So it was a less-than-pleasant few days of waiting to hear from the Lawyers about what our next move should be, with a few of the ‘kids’ talking to T in the interim and trying to get him to see that there was actual financial sense to doing this, and not financial risk!

The Lawyer let us know late Friday that he was going to make another visit to him on Monday for a last ditch effort at trying to get him to sign the Title.

My sister also ended up speaking to his Doctor on Friday, as the Doctor often takes him to church on a Sunday, and asked him if he could maybe broach the topic with T, and see if he could get some understanding into him – being that he as an ‘independent third party’ and thus not in the line of succession to “rip him off”… 😐

Sunday arrived, and the Dr took T to church, and spent quite a bit of time over lunch discussing the sale of the house with him, and explaining to him that in all good conscience, he could not recommend that he went back to the house to live, due to his health concerns.
He did what he could, and all we could do is wait…

Monday arrived, and we were notified by the Lawyers office that the Lawyer would be visiting T at the Aged Care home at around 1pm.
The Home also notified us that they had been contacted to advise of the visit.

Monday was a day that we spent feeling pretty ill with stress nerves, all damn day – as I’m sure you can imagine.

At 1:05pm, I noticed as I was doing chores, that the Bette Midle song ‘Wind Beneath My Wings’ had come on the radio.
It was the only song I had ever recorded and had sent to my mother, about 20 years ago…
I cried on hearing it – hoping it was a ‘sign’ from my Mumma, that things would be ok.
I knew I was grabbing at straws – but thats what we do when things get rough isn’t it…?!?

I swear the clouds parted and I could hear angels singing!!
I cried again – tears of such incredible relief – and uttered aloud a message of thanks, skyward..

So that’s why I am currently sitting at the airport, waiting for my flight South.

We need to pack up the house over the next few days, and put TnTs stuff into storage, and tidy the house, so that its ready for the new owners to begin moving their stuff in at the end of next week.

It won’t be an easy few days, but it is sooo much better than what could have been; and while going through their belongings and packing them up will be an emotional time, I will have two of my brothers and one of my sisters there, and we’ll all be supporting one another – and just being able to spend some quality time with my siblings is a blessing on its own.

Hopefully, things will run a little more smoothly from here on in!
Fingers crossed!