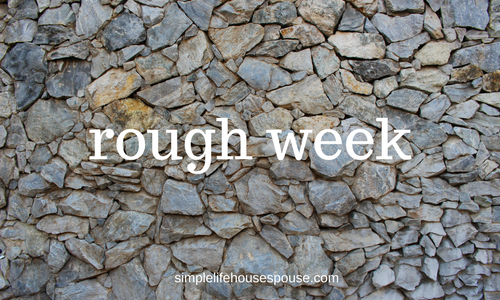 Its been a rough week, and in all honestly I am still not feeling thoroughly fabulous as I’m still getting over the whole dental debacle and the eventual outcome of same…

Its a bit of a dismal day here today which isn’t helping my mood any, and I think i took on a bit too much yesterday for my first outing after having been so very sick, and being in bed for most of the week…

To top it off, having spent so much time confined to bed – though admittedly most of it was spent either sleeping or drifting in and out of consciousness – I have spent a lot of time looking at the walls of our little home, and wanting to do something about it.

I must have known something was coming that was going to spur this on, as just prior to getting sick I had finally got fed-up with one specific wall in our house which i had been convinced for months that it had a bulge in it for a particular reason, and decided to put my big-girl-pants on and attack it to see if I could fix it.

It took almost an hour for me to get 6 small screws out of the wall, but the reason for the bulge was exactly as I had suspected, and with a bit of creative clamping and screwing, and another half hour or so of grunt-work, I was able to get the whole thing sitting flush.

YAAY ME!!
At least one win for this week!

I’ve been terribly lucky in that my Love has done everything possible to make my time off work and being sick in bed – as stress-free for me as possible, and has not only done all the shopping and arranging of meals, but has regularly left work to come home and check on me.
VERY appreciated – I gotta say…

Soooo, I’m feeling rather wiped out still today, but I’d really like to go to the hardware store, and have a look around – but my car is still parked out on the roadway because of the recent storms, and our driveway having become too boggy for my little car to make it through – and as much as I want to go into town, I just can not muster the energy required to walk out to where my car is currently stationed, and then walk from the car back to the FarmHouse once I return.

The stupid thing is, its probably only about 150m each way at most, but its about 140m more than i feel like I’ve got in me right now…. 🙁
And that just makes me feel like a big useless miserable lazy sook too!

I need to put on some chirpy music or a go-get-em podcast, and get myself out of this oh-so-tired pity-party funk!

But first, I might just need to have a lil nap…. 😐