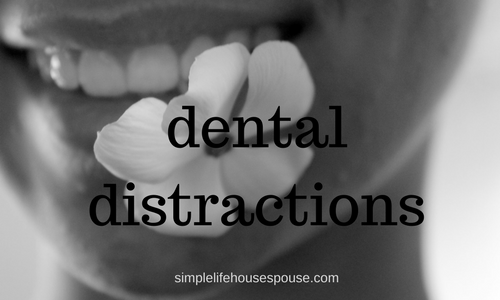 Its been a rather ‘uncomfortable’ week with me trying to ignore a possibly impending tooth infection, that didn’t go away when it was ignored, and thus resulted in me having to leave work when the dentist rang me this morning with an appointment opening.

I am not a big fan of dentists.

Unlike a lot of people, I’m not ’scared’ of the dentist, and can infact happily go to sleep in the chair when they’re working on my teeth – but it takes a lot (I’ve found anyways!) to find a good dentist who either isn’t a) a condescending asshole or b) just itching to rip your teeth out, rather than taking the time and effort to repair them!

Firstly – as an adult – I do not need to be spoken to like a three year old, and grilled about how often I clean my teeth, and do I do it properly etc etc.
Mate, I’ve been cleaning my teeth at least twice a day since I first grew baby-teeth, so do me a big ole favour, and do not assume that because I have shit teeth, I have shit hygiene.

My teeth are shit from medications I took when I was a kid.
Proven – not theory!
So back away slowly before I tell you what I really think of your attitude.

Secondly – don’t be so friggin anxious to rip my teeth out.
You can make a ton more money off me by trying to keep these babies in my moth than you can by throwing them in the bin!

Yes, I understand you can move on to the next patient faster, and therefore fit in more clients in a day, but mate – two hours worth of trying to save my teeth is pretty much guaranteed to earn you way more than the 2 or 3 clients you could have had in that same amount of time, and because I still have those teeth, I’ll be a return customer.

Once all my teeth have been pulled out, you can bet your boots that you’re not ever going to see me again, because I’ll have no need of your services you twit!

Thankfully – about two years ago I found myself a really great dentist.
He was new to town, and I was in the type of mood that I felt like I could cope with vetting a new dentist – so in I went for a “check up”.
(which was code for: ‘I’m checking out what you’re like fella!’)

He was nice, he was clean, he had good humour, he wasn’t a condescending dickhead, and he was extremely encouraging about saving my teeth!
What more could a woman ask for from her dentist!
Test passed! lol

As I said, I don’t have a good history with dentists, and nor have I been blessed with wonderfully healthy stable teeth.
Many of my teeth are like chalk, and as a result I have had to have a lot of extractions over the years and as a result I now wear dentures.
Have done for over a decade – but many people don’t actually realise this, unless I tell them – so thats kinda nice…

The teeth that I have left are what holds my dentures in place – and on the bottom row, I now only have one tooth remaining – which is rather scary, as once that one finally gives up the fight, I will have to go to a full denture which will require daily glueing in, unless I get posts put in – which I really can’t afford as they are thousands of dollars each! 🙁

I know that it is an inevitable outcome, but I’m trying to do all I can in the meantime, to drag out that inevitability!

Soooo, when I got that nagging little niggly pain under my one remaining lower tooth earlier this week, I sort of tried to ignore it and convince myself that I’d just eaten something sharp – like maybe a corn chip or something similar, and that I’d just damaged the gum a bit, and all would be well in a day or two….

But a day or two passed, then three, then five – and all was still not well.

I’d been diligently not chewing on that side and brushing religiously, massaging my gum lots, and resting the tissue – but the increase in the number of pain meds I was having to take to deal with the pain was not a good sign.

It was time for the dentist…

I didn’t want to hear him say those words: its time for it to come out – so avoiding the visit had been the only way around it – but the time had now well and truely come.

Off I trudged, rather full of gloom and dread – and wondering not only how I was going to manage my current denture whilst I had another one made (and who know how long that would take!) but also wondering how I was going to afford said new denture after having to pay for the ‘pleasure’ of having my tooth pulled…!

Can you imagine my sheer and utter delight when my fabulous dentist Peter said that he thought with a scrub-down, some regular antibacterial washes, and a course of penicillin, we should (hopefully) be able to save that lil baby for another good while?!?!??

Bliss.
That what I felt.
Total utter blissfully relieved gratitude!

And to also know that its a testament to ME that I have managed to nurse along these last few teeth that I have left, for so very much longer than was originally predicted – sure is a darn good feeling too 😀

The week didn’t start out too fabulous – but today I’m a much happier girl – even if I am still in a decent bit of pain.

Being given hope and having a belief in oneself truly are wonderful things!