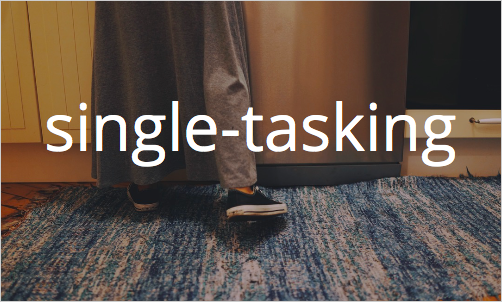 I pretty much try to single-task these days, just so that I can be more present with whatever it is that I am doing.

I know as a species we’re often quite impressed with ourselves, when we can do a myriad of chores at once, and we convince ourselves that we’re “saving time”.
But often – we either aren’t really saving time at all, and even if we do, we ‘waste’ what ever time we saved, not by just sitting back and enjoying Life – but in doing more mindless multitasking chores that we invent for ourselves.

Today though – I bent my rule a little bit…

I had a big day of baking to do today, as we have Family coming tonight, and I want to have enough goodies on hand, so that I don’t need to take myself away from the visit in order to bake.

So today I was making a dozen bread rolls, a large double loaf of regular bread, one loaf of sweet-bread, and eight sweet-bread rolls.
Which meant a lot of mixing, a lot of kneading – and a lot of waiting, for each batch requires two rises.

So when I was almost done, and was down to waiting for the last lot to rise before starting the cooking process, i thought i might try a little experiment.

I’d got some organic bees wax from the Health Food store earlier in the week, and I had some old clothing that was in the no-longer-to-be-worn pile, and I was pretty sure that amongst that pile, there was bound to be something that was 100% cotton.
With a bit of rummaging about, I found an old nightie that hadn’t been worn in too many years to recall, which I thought would fit the bill just fine!

I marked out a largish circle – using my bread-board as a guide, which I then cut out.
Unfortunately, I didn’t have any pinking shears on hand, so will have to tidy it up at a later date – but thats a minor inconvenience.

I also didn’t have a grater handy, so used one of my heavy bladed knives, to shave pieces of wax off the main block.
After laying down some baking paper, I then spread out the cotton, and covered it with a fine layer of shaved wax.

I then added another layer of baking paper, and a layer of alfoil (tin foil) over the lot.
I added the alfoil, as my experiment was to iron the wax/cotton paper sandwich, and I didnt want any of the wax sticking to the base of the iron.

Once the iron was good and hot, I ironed the ‘sandwich’, making sure I went right to the edges.

After the first go over, I had a little look, and realised there were places that had missed being ‘waxed’, so I added some more shavings in those places, and then re-ironed the ‘sandwich’.

It came out wonderfully!!

And as it turn out, I unintentionally waxed our raw wooden bench-top too.
Its lovely, and as slick as glass!
I might even do the rest of the bench eventually. lol

Hope you are having a lovely day,
Cheers,