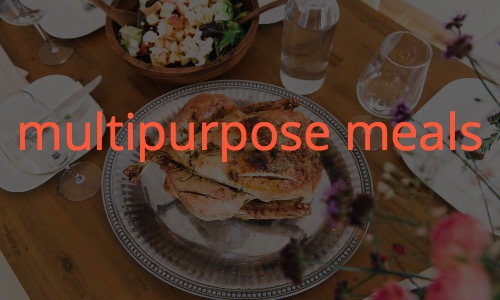 I love it when I can make a meal stretch out to feed us a few times.
Not only does it help save food in the end, but it saves a LOT of money in the process.
Gotta be happy with that….!

Soooo, this week I made a Mustard Chicken in the slow-cooker, to which I added a few whole large potatoes.
Not only does it save having to wash up an extra saucepan, but we like the firm but creamy consistency of potatoes that slow-cook in the juices of something yummy.

That evening, we had some mustard chicken, a potato each, plus I had cooked up some carrots, green beans, butter beans and zucchini to have with it too.

There were stacks of left-overs (about ½ of everything I had cooked), so I tossed the veggies in with the chicken, separated the potato into another container, and popped the lot in the fridge.

The next night, we boiled up some pasta, tossed some of the chicken and veggie leftovers through it, and had that with some home-made bread rolls.
YUM! – and it didn’t taste like we we were having last-nights dinner re-visited.

Today for lunch, that initial meal turned into a sort-of ‘Pie’.

I mashed up the leftover potato, and sprinkled a scant amount of cheese through it.
( I would have preferred to add an egg, but I had run out)
I pressed the potato into the casserole dish, to make a ‘base’ of sorts.
I then mixed some salt, pepper and garlic through the leftover chicken and veggies, which was then poured on top of the potato, and smoothed it all out.

Topped it all off with a light sprinkle of cheese, and some cracked pepper, and tossed it in a 180°C oven for about 15-20mins, until the top was browning and starting to crust.
This was served with warm home-made rolls, fresh from the oven.

As you’ll see in the photo (I forgot to take a before shot! duh!) there is still about ½ of the ‘Pie” left – so i’ll be having that by its self, for my lunch tomorrow.
Am realllllly looking forward to it too. lol

Do you have any favourite meals that you like mix up a bit, to get a few different meals out of the one thing?
If you do – I’d love to hear about them in the comments below!

Until next time,
Look after you,