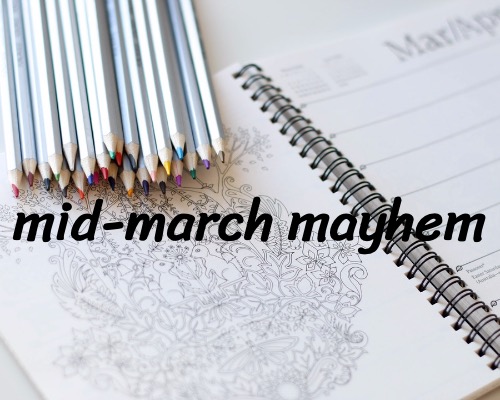 it’s time for a lil mid-march mayhem – also known as an update! lol

Respiratory specialist appointment done, followed by a week away at a work conference, and I’m now finalllllly back home.

The resp specialist went ok, with another round of lung function testing being done – which were slightly better than the ones I had done a fortnight ago.

Still not much further ahead to working out just what is going on, but with directions from the Specialist that I’m to test-drive a strong dose of steroids for the next fortnight, to have another round of bloods done, to have a CT done, to have further lung function testing on the day of my next appointment, and with the advising that he will get my GP to arrange for a Cardiac Specialist to see me, and for an ECG to also be done.

With the first appointment coming in at $480, I am a big bit terrified at how much this is all going to cost – especially as I have been making such headway with paying down historical debt….

I have done the blood tests and go back to the resp specialist next week.
I have yet to hear from the GP about the cardiac appointment.

On other events – the conference that I went away for was put on by Leading Age Services Australia.

It was down at the Gold Coast at The Star – which was unfortunately about 20mins away from the accommodation, it that was booked and paid for by work.

Personally I would have chosen to stay a lot closer, in much cheaper accommodation, but I tend to be the practical type, and things like having to rely on others for my transport to and from each day, drives this lil control-junkie a little batty. lol

It’s was also quite a distance away from anywhere to get groceries etc from too, so from my point of view was thoroughly impractical all round.

The restaurant in-house was lovely, and I had a prepaid breakfast there each morning, and had dinner there with my colleagues on the night that we arrived, but at over $70 per person (buffet only), it was beyond what I was willing to waste money on – for just a single meal – when I could eat for most of the week on that amount!

I’m all for a bit of spoiling – but that’s just silly for more than a once-off splurge.

I’ll send this off to post now – and perhaps give a bit more info about the Conference in another post – as I’m waiting for my previous boss, as we’re having lunch together and I’m really looking forward to catching up with her.