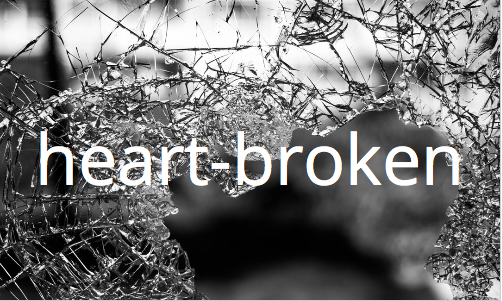 This week my heart shattered into a million tiny pieces…

Tuesday was the day for me to take Digby to be rehomed, but first I had to do a half day at work.

After work, I sat in the work car park for almost half an hour – sobbing my heart out; and I knew I was delaying the inevitable…

I was just about to text a friend, to see if I could go see her later in the day, after I’d done the ‘event’, when a text came through from her.

Her and her husband had just been advised by their Dr, that the husband has liver and spleen cancers – with node involvement…she just wanted to let me know, before word got around…

I sat for even longer in my car.
Crying for her, crying for him, crying for their kids and family – and feeling so damn petty about crying for Digby and myself…

Eventually – I went and collected Diggy, and drove with him the 30mins it took to where I had to deliver him to.
I’m not going to go into the overwhelming enormity of how the next hour or two went – but suffice to say I was sobbing so hard that no-one could understand a word I said, and I had to keep writing stuff down for them…

Its taken a couple of days for me to be able to be accepting thats it ok for me to grieve for Digby.
To not look at it from the perspective of husband versus dog – because thats not how it is.
That my grief isn’t any less than the grief that my beautiful friend is going through.
It isn’t less – its just different.
(and i thank the universe that its a whollllllle lot less terrifying! 🙁 )

To me – Digby hasn’t been “just a dog”.
For the last 8½ months, he has been by my side – and we’ve pretty much spent only a handful of hours apart each week – when I’ve been at work, or the grocery store.
He has made every trip to the Farm with me.
He has helped me paint every wall.
He has helped me plant every single vegetable in our garden beds.

He has been there at the end of a shitty day at work, to cuddle me while I cried.
He has lain next to me for days on end, when I lay frightened in bed, on mandatory bedrest – scared for what my future may hold if the damage to my back became any worse.
He has chased (almost) every ball and toy that I have thrown for him – and bought most of them back to me.
He has spent every night that we have slept at the Farm, tucked up beside me on his cushion the floor.

He has an addiction for cheese and bacon shapes, but cheese supreme corn chips will do at a pinch!
He loves being allowed to have one small peanut M&M every night after we’ve had our dinner – and he waits patiently by the bench for it to be ‘accidentally’ dropped, just for him.
He is clumsy as all getup, he has the worst farts of anything I ever smelt in my life, and he also has the biggest shits that I have come across – ever!

He loves to swim with his head under water, and a deep mud puddle is his idea of heaven.
When he’s bored or antsy – he grabs me by the arm to come play with him, and doesn’t easily give in until I do.
And that’s been a blessing – teaching me to slow down, to just live – and about how much the little things matter…

He has helped me get up the stairs so many dozens of times, when I didn’t have enough strength to get myself up them.
He has helped me write dozens of blog articles.
He has been my walking stick, when my every step was filled with agony.

He has listened to my hopes, my dreams, my fears, and my tears.
And every time – at the end of it – he has always made me smile.

No – Digby wasn’t “just a dog” – he was and IS, a part of my heart.
And my heart has shattered into a million tiny pieces…