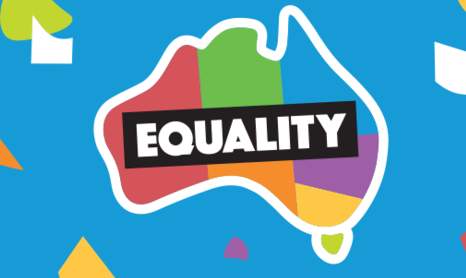 Yesterday I was suffering through day #2 of a veryyyy tedious two day conference.
I was not a particularly willing participant, and the content was at kindergarten level – so to say that I was less than impressed could be the understatement of the week! 😐

Yesterday was also the day that the Marriage Equality Bill was being voted on in the Senate.

I had not really been keeping up-to-date with the goings on of the Bill, but I knew that the decision was expected some time throughout the day.

But I didn’t keep tabs on it – as, in all honestly – I was too worried about it coming back in the negative, particularly with the religious exemptions that were being argued around it, and didn’t want to have to have to hide my disappointment throughout the conference…

Needless to say – I was thoroughly delighted – and it sure helped me get through the rest of the afternoon! lol

The vote now goes to the House of Representatives, sometime next week – which is the final hurdle for Marriage Equality in Australia.

It will be a nervous wait to see what happens – but I have to have faith that the right thing WILL be done..